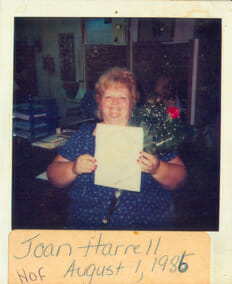 Would you like to learn more about how Answering Service Care can help your business? Call us at (800) 430-6511 or schedule a meeting

Six months… that’s how long I was suppose to stay with the answering service and here I am thirty-five years later. It is amazing how time flies but it has been a wonderful journey!

My husband Mark started an answering service in 1970 right here in Margate Florida. We had about two hundred clients and six employees (including my husband and I) that shared two switchboards. In 1975 while attending an answering service convention, Mark and I met Herman Shooster of Ding-A-Ling Answering Service. We could tell that Herman had a kind heart and was a smart businessman, he asked us if we were interested in selling our answering service, however we were not so we told him no.

He informed us of a change that was on the horizon for the answering service industry. The old fashion switchboards were on the verge of being replaced by computers and other telephone answering technologies. It then became obvious that it would be very expensive to upgrade our systems to continue to stay in business and grow.

After I gave birth to my first son in 1977, it was challenging operating a 24/7 live answering service and raising a child, so Mark and I decided to take Herman up on his offer and sell Harrell’s Answering Service. As a part of the deal, I was asked by Herman to continue to work with the company for six months so the transition of our clients would be smoother. Because we had such a small group of clients we were very close, they would even come into the office and have lunch with us when they came to pay their bills.

The following March, I began working at Ding-A-Ling Answering Service as an operator. Over the next few months the bond between the Shooster family and I grew and I realized the passion I had for helping others and offering quality answering service. At the end of my six months I decided to stay because the company felt like my second family. About ten years later the answering service outgrew our current storefront office and some of us would move to a more spacious office in Margate. On August 8th 1988, I was delighted to be the person who turned the key at our new Margate location signifying our opening. At that time I became a supervisor then a manager and eventually the Director of Operations.

In 1998, I remember Stephen, Herman’s third son, preparing for a trip to Israel. I casually said to him “I am going to hide in your suitcase.” He laughed and replied “really? You want to go to Israel?” I said yes it is the Holy land and it is my husband’s dream.

A few weeks went by and Herman called me into his office. “What’s this I hear about you wanting to go to Israel?” He asked. I replied “Yes, it is our dream. My husband and I would love to go” and he smiled and said “maybe someday you will get a chance to go.”  A few days later I found myself back in Herman’s office; he looked at me and said “guess what, you are going to Israel”. I was so stunned; I could hardly speak, and I felt as though I was about to fall of the chair.

He explained that he called my church, spoke with the Pastor and arranged for Mark and I to go on tour with them. He told me that I would be leaving on December 29th for ten days and because it was already paid for I didn’t have much of a choice. Herman really brought me to tears, I always knew he had a great heart but what he did for my husband and I was unexpected and far beyond what a boss does for their employees. It did not stop there; he made it a tradition – once you are a member of our family for twenty years you will be offered the same wonderful experience as I was, a trip to any destination you desire. For ten days my husband and I lived a dream. We saw everything: Mark was baptized in the Jordon River, he floated in the Dead Sea, we toured the Garden of Gethsemane, we were in Bethlehem, Jerusalem and Mark even rode a camel, it was beyond anything we could have ever imagined.

It is so different working at Answering Service Care, we are all family and we take care of each other. I have so many positive memories of the company; they have been with me through so much. Some of the saddest times in my life were spent right here and I made it through only because of the support and encouragement that I received from everyone. Years ago when my grand-daughter, Taylor was diagnosed with Leukemia, Answering Service Care donated $1,000 towards her fundraiser to help with treatment cost. Then when her condition took a turn for the worst I was encouraged to go and be with her and not to worry about my position that it will be here when I get back. I will never be able to thank the Shooster family and my team enough for being there for me.

There are many, many more stories that I can share, when the company stood by me and helped me stay strong. And today as I walk around the office and I see my family, the words of Herman Shooster resounds deep within me “each morning when you wake up, you should wake up with a purpose”, I am so happy that I have found mine, this truly is my passion and I wouldn’t trade it for the world.

We use cookies to ensure that we give you the best experience on our website. If you continue to use this site we will assume that you are happy with it. Read our Cookie Policy.