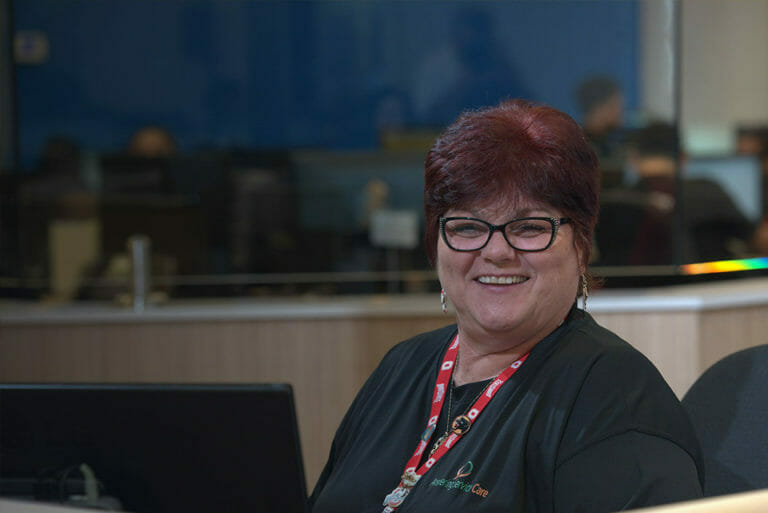 Energetic, fun, and vivacious are words often used to describe Answering Service Care employee Jane Ann Durthaler. Jane-Ann who recently celebrated her twenty-two year anniversary with the company and was excited to share with us her journey with the company.

Hired in June of 1991, Jane-Ann laughs heartily as she recalls the early years of her career. “I started working a part-time evening shift. I looked after my ‘kiddies’ during the day time while my husband was at work, then he watched them during the evening when I was at work”.

As she became more involved in the company and proficient in her responsibilities, Jane-Ann began to venture into other aspects of the answering service. “I started learning about the communication system and the process by which our clients would receive their messages”, Jane explained. She added that “most of our answering service clients back then had a beeper, so we would send them an alert and they would call us to hear the message”. Driven by her new passion and now educated in answering service telephony, Jane-Ann was promoted to a Team Lead in early 1993.

“Up till this point my name was ‘Jane’ – not Jane-Ann”, she shared, bursting into laughter. “There were three employees by the name Jane, so for us to not be confused we had Jane1, Jane2 and I was Jane3. But even that was confusing, and very often even I would forget which Jane I was and answer to everything, so eventually my middle name was tagged on and I became Jane-Ann.” Memories like these, according to Jane-Ann, were what made Answering Service Care a happy place. She recalls her time with the company being filled with both laughter and unforgettable memories.

A few months into her new position and plagued by the fever of the “800 number businesses” starting to become a great successes, Jane-Ann decided to work as a member of the call center team. “I transferred to work as an Account Representative for the call center”, Jane-Ann explained. “I learned how to create accounts for different products being promoted through commercials. The company would send a copy of the product being advertised and then I would have to create an account for the agents to answer the calls for that product”, After about six months, however, Jane-Ann started missing her answering service family and requested to be transferred back.

When asked to share her opinion on Answering Service Care, Jane-Ann said “they have been very good to me. The company is extremely family-oriented and it has been amazing to see how we have grown”.

Jane-Ann shares one particular instance that she holds close to her heart: She recalls that in December of 1997, right before Christmas, when her house was robbed. “It was an awful experience. Our founder Herman Shooster called me into his office and asked if I needed anything. I was flattered by his compassion however I responded ‘No, but that is so sweet of you to ask’. Herman replied “Sweet!? This is not sweet, you were robbed and if you need anything, we are here for you! And I never forgot that. It meant so much to me knowing I am a part of such a loving family.”

Another cherished memory of Jane-Ann is when she received a pair of diamond earrings on her tenth anniversary. Five years later, when she celebrated her fifteen-year anniversary, she enjoyed a weekend ‘getaway’ for two courtesy of the Shooster family. And now, to celebrate her twenty-year anniversary, Jane-Ann intends to jet off to Australia for ten wonderful days.

As I approach my twenty-two-year milestone, as a proud member of Answering Service Care, it can only be defined as phenomenal. I love it now, even more than when I started, and look forward to being here many, many, many more years!