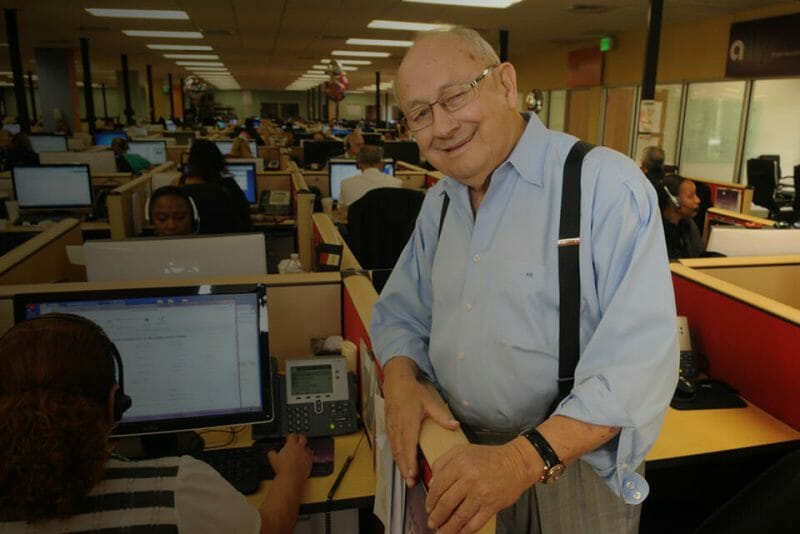 Herman Shooster founder and chairman of Answering Service Care Corporation, was honored with the 2012 Excalibur Award. This award is presented annually by one of the main newspapers of South Florida, The Sun Sentinel, to the business leaders of the year in Broward and Palm Beach Counties in effort to “recognize their success within the business community and their commitment to the values of innovation, company growth and community contribution.”

Born in Chester, Pennsylvania, Herman was the youngest of three brothers. Growing up during the great depression he began working at his father’s gas station as a pump boy and by age 14 and when his father opened Shooster’s drive-in restaurant he became a short order cook flipping hamburgers.

Shortly after the attack on Pearl Harbor in 1941 Herman now 18 enlisted in the US army. Prior to his enlistment he completed one year of pre-med studies at Temple University making him an ideal candidate to serve as a medic in New Guinea and the Philippines during his three years of active duty. After the dust cleared and our country was once again at peace, Herman returned to Temple University changed his major and earned a degree in Marketing.

Skillfully Herman built a few successful businesses eventually taking one of them public. However in 1971 Herman lost control of his company and was fired from his executive position.  He then floundered for a couple of years trying to find his way. Seeking a change, in 1973, he moved his wife Dorothy and their four children to South Florida and using their life savings from the proceeds of their home in Cherry Hill, New Jersey, Herman invested in a small answering service with about twelve employees called Ding-A-Ling Answering Service. Over time with the support of his wife and kids the business grew and evolved into first Communication Service Center, a call center, and then Answering Service Care Corporation.

[quote style=”1″]Herman has earned a reputation for taking good care of his employees, many of whom take obvious pride in the number of years they’ve put in at the company. His employees seem to know one another’s tenure almost as well as they know their names. For his part, Herman rewards their loyalty with his bent toward progressive policies and generous rewards. For instance, when he began offering child care as an employee benefit 25 years ago, he landed on the front page of the Wall Street Journal.

And in a day when gold watches for service are the stuff of distant corporate memories, Herman doles out luxury watches and diamond earrings to employees on their 10-year anniversaries. For the 20-year veterans, he finances a trip for two anywhere in the world. – Maria Mallory White; Sun Sentinel[/quote]

Cutting edge technology has replaced the tedious process of ‘operators taking hand-written messages and using cumbersome wire plug-ins to connect calls.’ And even though the small answering service that Herman purchased almost four decades ago has also grown into one of America’s top 50 contact centers, he never lost sight of our telephone answering service roots and still offers our answering service under a trusted and caring brand.

Answering Service Care congratulations our founder on this monumental achievement and would like to say how proud we are of you, not only as our founder but also as our friend and mentor.